Proposals to create private investment accounts in Social Security will victimize ill-equipped investors, generate huge fees for the mutual fund industry and jeopardize the financial security of millions of Americans 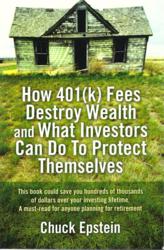 Privatizing any aspect of Social Security into private accounts will subject millions of unsuspecting, ill-prepared investors to pay a lot for very little in return,”

The proposed plan to privatize Social Security advanced by Republicans since 2005 will guarantee that younger workers, especially those in the Gen X and Gen Y generations, will pay more in fees and assume all the market risk for their future retirements. They will also become the victims of more sophisticated trading and marketing strategies designed to benefit investment professionals more thasn individual investors.

That’s the prediction from Chuck Epstein, author of the new book, “How 401(k) Fees Destroy Wealth and What Investors Can do To Protect Themselves.”

In the book, Epstein writes abut the dangers stemming from proposals to create private investment plans as part of Social Security advanced by President George Bush in 2005, and later expanded upon by Representative Paul Ryan (W-Wis.) and Sen. John Sununu (R-N.H.), Those proposals would have allowed workers under the age of 55 to invest approximately half their payroll tax contributions into a private account managed by an investment or insurance firm. This privatization plan was also supported by presidential candidate Mitt Romney.

According to Epstein, author of the new book, “How 401(K) Fees Destroy Wealth and What Investors Can Do To Protect Themselves,” the politically partisan calls for privatizing Social Security “will not only increase financial insecurity among investors, but it will be part of the greatest wealth transfer in the nation’s history.

“Privatizing Social Security will effectively expose millions of ill-equipped investors to the mutual fund industry, which is focused on collecting fees, while evading the fact that the majority of fund managers have very little ability to deliver consistent, above-index market returns that would actually help improve their customers’ lives. That explains the sad reality that two-thirds of mutual funds fail to beat their own benchmarks, according to Morningstar,” Epstein said.

In a private Social Security account situation, millions of unsophisticated investors will be paying fees they fully fail to understand. For example, when investors see that a fund is charging a fee of 1%, they fail to see the fee’s cumulative impact. A General Accounting Office study found that over a 20-year period, each 1% paid in investment fees reduces an investor’s end return by approximately 17%. This drawdown is even worse if an investor is also paying their investment adviser an annual management fee of 1% and annual 401(k) fees of 1%. In this situation, an investor’s year-end return is cut by 34%.

“This is just one example of how privatizing any aspect of Social Security into private accounts will subject millions of unsuspecting, ill-prepared investors to pay a lot for very little in return,” Epstein said. “But it will reinforce the existing conflict-of-interest relationships that unfortunately characterizes too much of the investment industry.”

The book is based on the first-hand experiences of author and financial professional Chuck Epstein, who spent over 25 years in the financial services industry, including holding senior editor positions in the futures industry and at two major mutual fund firms.

Islamic Finance Could Boom If It Adopts ESG Standards

Grow Your RIA Business in the Post-COVID World

The 2020 election has made it evident that the American economic and political system is designed to be grossly unfair to average citizens.

Disparities in tax rates, access to voting, gaming the tax system, cronyism, bad business practices, preferential treatment by the legal and financial system are all on full display.

It’s safe to say these fissures in the democratic system are more glaring today than ever before.

This is the system that created tax loopholes that allowed Trump to evade taxes for years as he continued to rack up financial losses.  His abuse of power and knowledge about working with banks that operated in the shadows and allowed him to be forgiven on millions of dollars in loans is something few experts can explain.

This site can educate and motivate. It can put you in touch with ethical financial firms,  fiduciary planners, Registered Investment Advisors who provide conflict-free advice,  and co-op banks and credit unions.

One goal is to take more control over your financial future, especially for retirement and funding a college education. Take control of your investment future using the information in this book. It can save you thousands of dollars.

Why the Anti-Woman Smear Against Bernie Makes No Sense

Progressives Have the New Ideas in Tonight’s Dem Debate

The GOP’s War Against Retirees

U.S. Generals Are Making a Killing in Pension Benefits and Salaries

ABOUT US
The $3 trillion mutual fund and financial advisor industries play a critical role in determining the financial well-being of millions of Americans. The industry’s problems, ranging from conflicts of interest to lack of transparency, affect retirement planning and the ability to build secure financial futures for millions of investors. You can prevent this by working with a Registered Investment Advisor (RIA), using low-cost ETFs and mutual funds, and supporting pro-investor regulations that should be proposed in the Biden presidential administration. HIgh fees also cut into your portfolio returns. To learn more, get the book, How 401(k) Fees Destroy Wealth, on Amazon.
Contact us: info@theprogressiveinvestor.org
FOLLOW US
© 2020 theprogressiveinvestor.org. All Rights Reserved.